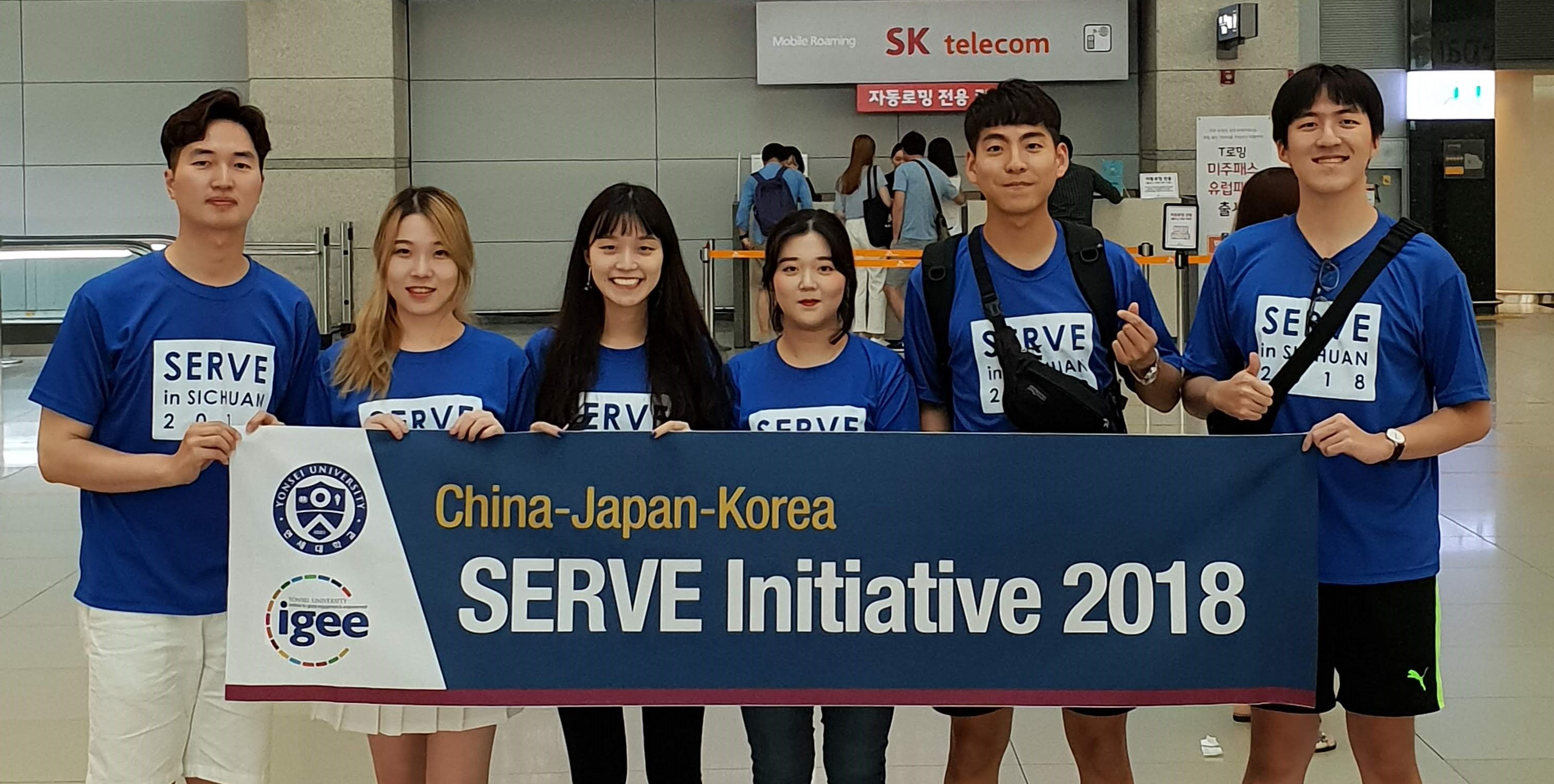 The Institute for Global Engagement & Empowerment (IGEE) at Yonsei University held its first special forum, ‘GEEF for ALL,’ via YouTube on May 10, 2021.

‘GEEF for ALL’ is being held quarterly regarding the topic of ‘Sustainable Development.’ Its first special seminar, held under the theme “Human Rights and Peace of Myanmar,” discussed the overall critical situation, which was mainly caused by the military coup in February.

The first ‘GEEF for ALL’ began with a special speech by Ban Ki-moon, the Honorary Chair of IGEE (8th Secretary-General of the United Nations), followed by a keynote speech by Yanghee Lee, a professor at Sungkyunkwan University (former UN Special Rapporteur on the situation of human rights in Myanmar.) The seminar was moderated by Lee Sang Kook, a professor from the Department of Cultural Anthropology at Yonsei University, and the speakers and panelists included Dr. Maung Zarni, the Co-founder of FORSEA (Forces of Renewal Southeast Asia), Mr. Maung Zaw, the representative of ThaByae (an organization supporting child health and education in Myanmar), and Kim Young-Mi, a Korean production director specializing in global disputes. Throughout the seminar, they not only discussed the details of the Myanmar crisis but also recognized the gravity of the issue and debated the means of responding to the current situation in Myanmar.

In his opening speech, Honorary Chair Ban Ki-moon emphasized that “the Myanmar crisis is neither a domestic situation nor an internal matter,” and that he urges “the UN and ASEAN leaders to take immediate actions to halt the violence and bloodshed, and initiate a process to restore peace and democracy in Myanmar.” Professor Yanghee Lee stressed that “the Security Council, individual states, and groups of states can all apply pressure to the military by supporting the ‘3-cuts strategy’: cutting the weapons, cash, and impunity,” She further added that urgent actions must be taken to “support the peoples of Myanmar as they fight to free themselves from tyranny.”

During the panel discussion, the inhumane actions carried out by the military, the military’s aggressive suppression strategies, and Myanmar’s current human rights issues were further discussed. Dr. Maung Zarni, the Co-founder of FORSEA firmly stated that the ultimate goal of the peoples of Myanmar is to “not simply return to the pre-coup limited democracy within the framework of the military’s Constitution of the year 2008,” but to establish a “New Inclusive Society & Federal Democracy,” in which universal human rights are protected.

Mr. Maung Zaw, the Representative of ThaByae as well as a human rights activist highlighted that “the younger generation is fighting at the frontline of the protests against the military coup,” and that “although it may take quite some time, the peoples of Myanmar will incessantly fight for the restoration of democracy.”

Moreover, production director Kim Young-Mi introduced three youth protestors, who had become leaders of the resistance after the military launched a coup in February. She also touched on Myanmar’s tragic reality and the military’s flagrant abuse of human rights. She emphasized that now could be “the golden time” to restore peace and human rights in Myanmar. All the speakers who participated in the discussion shared a common opinion that the international community, including ASEAN countries, and the United Nations must cooperate to ameliorate and resolve the current situation in Myanmar.

The Institute for Global Engagement and Empowerment (IGEE) at Yonsei University was established in 2017 to strengthen the university's social responsibility to educate future leaders of our society under three significant values: engagement, innovation, and excellence. With the aim of increasing awareness of the importance of sustainable development, IGEE has been hosting an annual international GEEF (Global Engagement & Empowerment Forum on Sustainable Development) in February.

“GEEF for ALL” was created to serve as an effective and sustainable platform to share constructive opinions and raise awareness of global issues. ‘GEEF for ALL’ seminars will be continuously held in the future and actively engage in the UN 2030 agenda for sustainable development in high hopes of creating a better world for everyone. 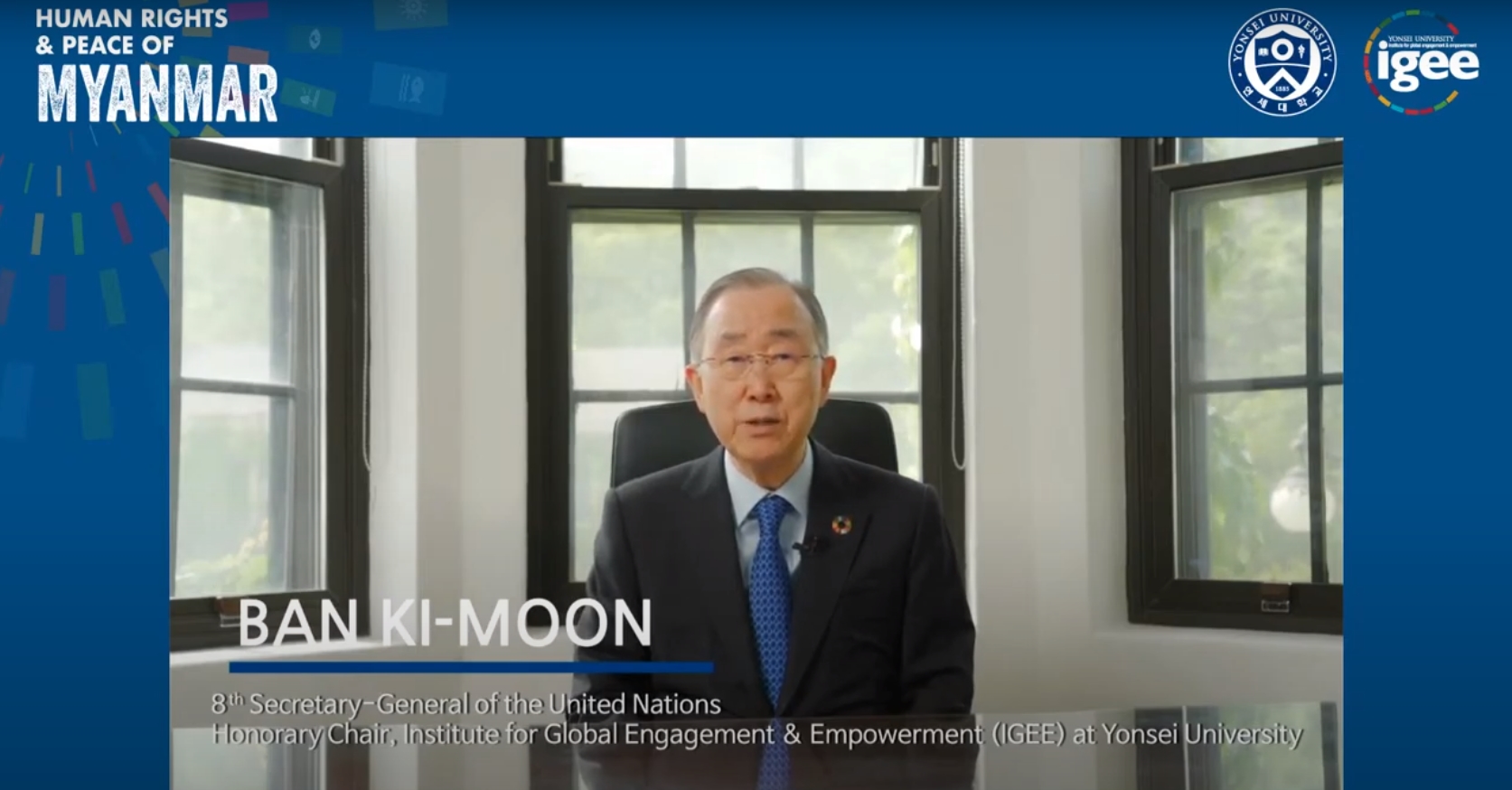 Ban Ki-moon, Honorary Chair of IGEE at Yonsei University addresses the audience at the first ‘GEEF for ALL’ on May 10, 2021. 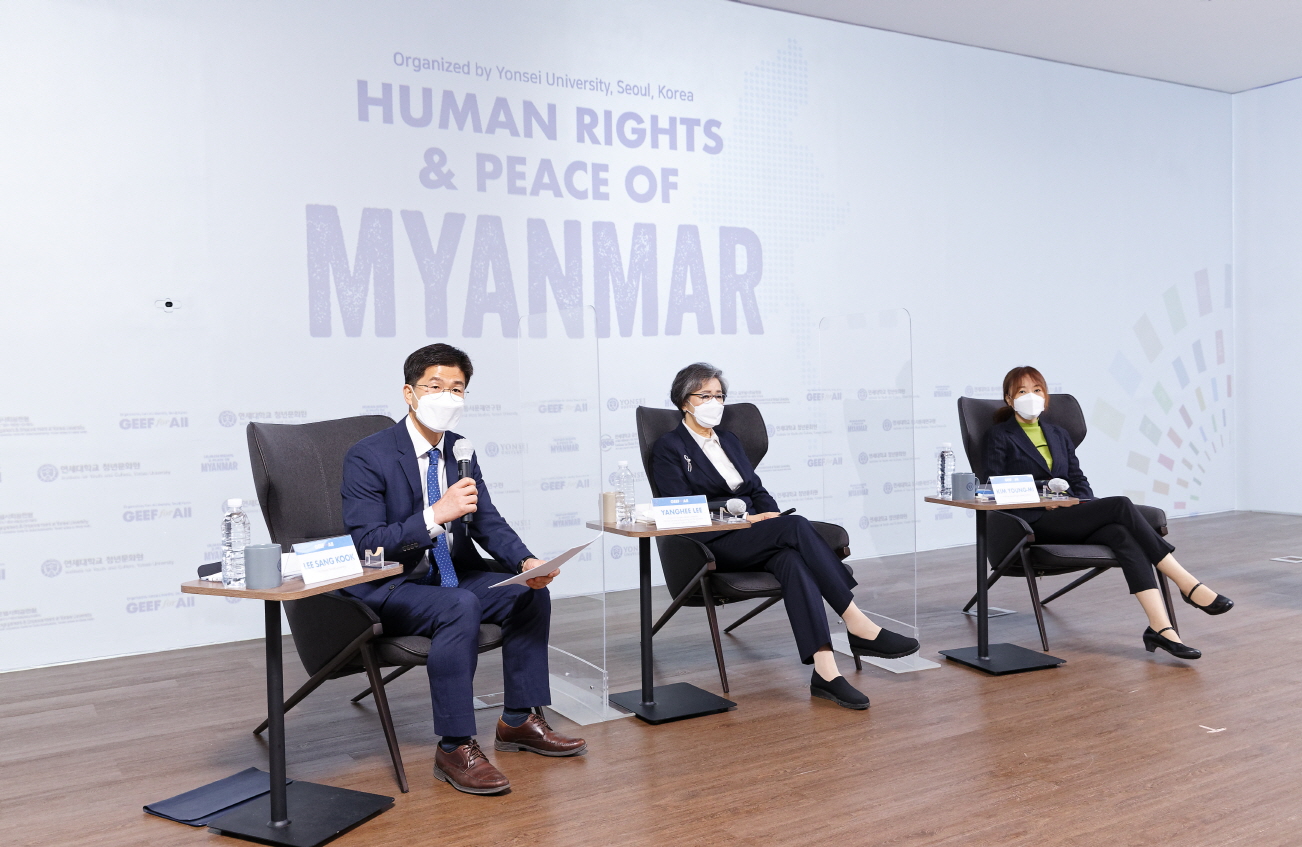 Professor Lee Sang Kook(Left) from Yonsei University, Professor Yanghee Lee(Center) from Sungkyunkwan University, and Production Director Kim Young-Mi(Right) discuss the Myanmar crisis at the first ‘GEEF for ALL’ on May 10, 2021.